To prepare for the skywriting, Kim Beck used the Sign Show billboard database to identify words and symbols that appear frequently on Missouri interstate signage. The phrases she selected—SPACE AVAILABLE, OPEN DAILY!, NEXT EXIT, and OPEN with an arrow—were visible for a 20-mile radius. People across could see it downtown, on the University of Missouri campus, in surrounding neighborhoods, and out the interstate. In the sky, the generic ad phrases, detached from their usual context, proved poetic and thought provoking. On the billboard, the NEXT EXIT image returns this language to its original location in a transformed state; it appears as a slice of dislocated sky along the side of the road.

The Sign Show timed the skywriting to coincide with tailgating ahead of the Missouri Tigers home football game against the Kentucky Wildcats. By introducing public art into the arena of college sports, we aimed to tap a large and captive audience in the promotional spirit of billboard ad culture. Local and university media helped promote the event, encouraging viewers to take and share pictures or videos tagged #mosky and #mizsky. We're grateful to the many people who did just that, and who otherwise expressed their enthusiasm about the skywriting spectacle. 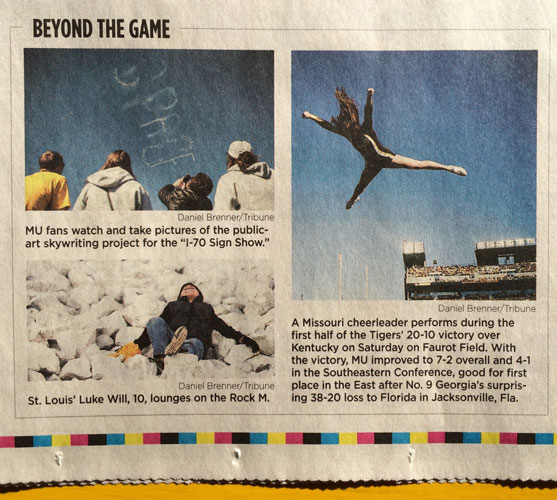 This was the third incarnation of Beck's skywriting project, staged previously in Pittsburgh and New York City. The artist has throughout her career investigated the language and physical presence of signage and wayfinding in natural and urban settings. "The Sky Is the Limit" engages airspace as the most potent symbol of longing in the landscape.

"The Sky Is the Limit," as part of the I-70 Sign Show, was made possible with financial support from the University of Missouri Office of the Provost, the Mizzou Advantage Media of the Future initiative, and the School of Journalism. The student-run MU Organization Resource Group (ORG) sponsored Kim Beck as a visiting artist and lecturer. We would also like to thank those who contributed photographs or otherwise helped document the event: Charles Barnes, Nathan Boyer, Robert Brendel, Maeve Casey, Imani Cobbs, Derek Davis, Matthew Flores, Madeline Hodek, Katherine Hogsett, India Ivy, Joe Johnson, Olivia Paggiarino, Gwendolyn Prenger, Matt Rahner, Emily Sewell, Justin Stewart, and Lihua Yu.

More information about Kim Beck may be found at www.idealcities.com